The Comedy Store Players were born on October 27th 1985, at the old Leicester Square venue. The team that night were Kit Hollerbach, Dave Cohen, Neil Mullarkey and Mike Myers.

A month after that opening night Paul Merton joined the line-up.

They were only allowed to do the second half of the show; the first half was stand up because it was felt that an audience would have to be lured to see a show where there was no script.

Less than twenty people turned up for that debut performance.

Mike and Kit taught Neil, Dave, and Paul, the games that they had played for years in North America, many of which had originated as games for deprived children in Chicago in the Fifties. Whilst the show has developed and changed over the years, many of these games still form the basic structure. Basically, if it ain't broke, don't fix it.

Soon they were allowed to do the whole evening. Richard Vranch came along in 1986, and quickly became part of the team, improvising the games on stage as well as music when required.

I’d done an impro show with Jim Sweeney, but at the Store it was even scarier. Lots of the established stand-ups used to guest then. But the great thing was - and still is - no line learning, no rehearsals, no set to dismantle, and great people.

In the summer of 1986, just before Mike Myers returned to his native Canada, the Players went to the Edinburgh Festival and one night Josie Lawrence, an actress who was directing a play there, guested with the team. Soon she was a member.

The team, briefly, had Jeremy Hardy as a member.

I feel blessed that I have this ability to make people laugh with stuff that just comes off the top of my head, but the best feeling in the world is when I make my fellow Comedy Store Players laugh because that’s when I know that I am really being funny

With the continued support of The Comedy Store, the Players kept going.

Gradually the audiences grew. They even started to sell out.

The Players first encounter with TV was a pilot 'live' show put together by two enterprising producers from the BBC religious affairs department. It was filmed in St. Albans (because that was where the Songs Of Praise cameras were) in front of a promenade audience who sauntered over to the stage just as they were finishing their two and a half minutes, and then couldn't hear the team above the noise of their own conversation.

It became very clear, very early on, that what happened in the dressing room was as important as what happened on stage. In other words this was a social rather than a professional gig. I liked that. I think that is why we are still doing it.

Thanks to the success of the TV version of Whose Line is it Anyway?, people were now familiar with their brand of improvisation. Sundays were selling so well that on October 11th 1989, the Players began an experimental season of Wednesday night shows. There was no way of knowing if it would attract an audience. It was a sell out... so these also continued, right up until March 2020 (when all live entertainment had to stop).

The Players embarked on two nationwide sell-out tours in 1990 and 1991.

Jim Sweeney joined the Players in 1992.

I meet my mates, have a laugh and get paid for it. It’s the best job in the world.

In 1993 The Comedy Store moved location in to its present home in Piccadilly.

Radio mics replaced the old ceiling mics and they finally got their own toilet backstage.

The longevity of the Players relies on the excellent pool of guests who regularly appear in the show. Without them, the Players simply wouldn't survive, or without the musicians who provide improvised music for the show.

In 1995, Andy Smart, who had guested regularly from the early days, joined the team.

When it takes off, when from absolutely nothing it comes together into a massive rolling wave of laughter, it really grabs you and you soar on the atavistic emotion of a collective magic

On September 28th 2000, the Players performed for the first time at the Manchester Comedy Store. They appeared there regularly until July 15th 2003.

In 1998 the Players were invited to perform at Shakespeare's Globe Theatre by artistic director Mark Rylance, and they returned every year until 2021. They also performed for many years at Regent's Park Open Air Theatre, and toured India in 2004.

The Players celebrated their 20th birthday in 2005:

Jim Sweeney retired from performance in 2008 and took up the position of President of The Comedy Store Players.

On the occasion of their 25th birthday in October 2010, Guinness World Records officially confirmed the Comedy Store Players show is the world’s longest-running comedy show with the same cast, and handed over an official certificate.

It was like I came from another planet with some Beatles tunes that nobody knew. I showed them how to do it. But they got the hang of it very quickly. Before long they were writing their own tunes that were better than The Beatles. I thought, ‘Oh dear, they’re very good.’ 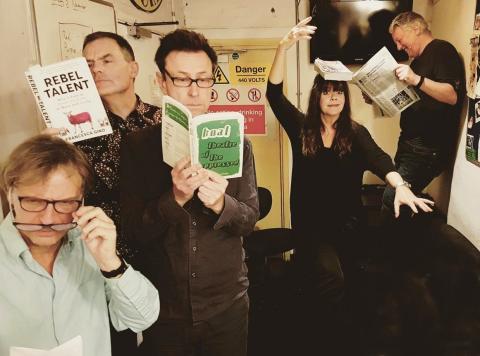