Was it friendship at first sight?

Josie: I saw him on stage when I was in a group called Denise Black and The Kray Sisters. He had long curls, like a blond Jesus, but he was very much in love with Carol [his long-term girlfriend]. He made me laugh, and that's very sexy. I did impro with him in the Rupert Pupkin Collective.

Jim: She used to be in a group, and I fancied all of them. She came up to me one night after a show at Jongleurs [a comedy club] in Clapham and said she wanted to do impro, so I told her to have a go. And it sickens me to say she was brilliant. We've been friends ever since, working together almost every week for 20 years now.

When did you first realise you were funny?

Josie: I always got through things at school by being the joker. My friend and I once spent the day being Britt Ekland and Rod Stewart – I was Rod – because we'd found some blond wigs [mimes fright wig by running fingers through hair]. Once we were on a roll you couldn't stop us. We'd stick pictures of ourselves in bikinis under our tutor's door. That would be quite dangerous now, but it was such a laugh.

Jim: I can't say with any real truth, because only relatively recently have I felt confident. When people laugh at you on a regular basis you know you've got something to say. But I wasn't the joker at school – I was the quiet boy at the back.

What do you like about going to each other's house?

Josie: It's a very friendly place. Last time I was round there I spent the day with Izzy, his teenage daughter, who's very dry and clever. She said she'd been thinking about having an island with just women on it, and we'd all worship the dozy cow. I said, 'Who's the dozy cow?' and she said, 'You.'

Jim: Josie has these girls' salons that also accommodate boys, and everything is always full on. I have to say Josie does a good party. And her house is always tidy! Mind, I've never seen how she keeps it when she's on her own, and she wouldn't be beyond frantically tidying it before we arrive.

What kind of old person do you plan on becoming?

Josie: A mad, eccentric one. If I've got my health. I'm looking forward to it.

Jim: I used to go to a pub in Teddington [south-west London], and there was always this group of guys aged about 60 who'd meet up once a week, drink lots of beer and laugh, and then go home. The idea of spending the afternoon drinking and laughing with your friends appeals. I've got friends who already meet up and play dominoes.

Is the flip side of comedy melancholy, and do you cheer each other up?

Josie: I wouldn't say I'm melancholic. I used to worry, but now I'm always surrounded by people who can bring me out of it. It's good therapy being with people who can always make me laugh.

Jim: No, I don't think so at all. I really enjoy what I do. I'm 46 and I shouldn't be having this much fun. I get paid money to go places and talk to people – like now, I'm sitting in the London Palladium, drinking champagne and eating Pringles. How can I complain? Josie doesn't often need cheering up, but when she's been down during rehearsals [for the part of Anna in The King and I], I've sung silly songs like Turning Japanese and We Are Siamese from Lady and the Tramp.

Tell us a secret about each other

Josie: I promised not to mention the embroidery.

Jim: She believes her cats can talk.

What brings on a crisis of confidence?

Josie: When you've been rehearsing for weeks, there's always a time when you think, 'I'm crap, I can't do this.' That happened yesterday.

Jim: I can't be doing with crises. I don't need people telling me I'm wonderful because I know I am.

Josie says the Comedy Store boys are protective of her. Does she need protecting, and from what?

Josie: I was being nice when I said that, and they'd never admit to it anyway. All of them call a spade a spade, and they will always tell me if I'm being silly. And we're not great group-hug people. I did Shakespeare, The Taming of the Shrew, and I came back after a year and they just said [slumps in chair, feigns yawn], 'Oh, hi.'

Jim: She doesn't need it at all, but we do get protective if some love-struck young pup is hassling her. There are six of us, and we form a circle round her and whisk her to the pub and get beer down her. The rest of the time we try to avoid her.

What would be his/her catchphrase?

Josie: We already have one for him: 'Old enough to know better'.

Jim: Don't know about a catchphrase for her, but she calls me 'Poor Old Blind Pubehead' [Jim has an optic nerve condition that leaves his vision blurred]. My hair used to be very short, and as it's curly – well, you can guess the rest…

Are there rules about having a comedian as a best friend, e.g. not nicking each other's material?

Josie: Stealing doesn't materialise because we're improvisers. Even if we both heard the same anecdote at a party, we wouldn't argue over who'd get to use it. We're different people, and we observe the same things slightly differently [wafts hands artistically in brief spell of luvvyness].

Jim: We both work in impro, so there's nothing to nick – though obviously I'm furious because I was desperate to play Anna. When this job came up, I told her she had to take it because it was too good an anecdote not to say, 'I took over from Elaine Paige at the Palladium and I'm in Dressing Room Number 1 – Yul Brynner's dressing room, darling.' a) Calista Flockhart b) Peter Mandelson or c) Laurence Llewelyn-Bowen. And you have to do a nude scene with one of them…

Josie: Calista Flockhart. We could do an artistic shot where she was hidden in my underarm hair. She could nestle there in the luxuriant tresses and poke her little face out. Or I could have her sitting cross-legged in the palm of my hand.

Jim: Who's Calista Flockhart? The Ally McBeal girl? It'd have to be her. Attractive though B and C are, I don't bat for the other team.

If you could clone yourself for a year, what would the other you do?

Josie: I'd turn myself into a cross between Lara Croft and Indiana Jones and go on mad adventures in the jungle.

Jim: I wouldn't do the shows, so I'd gain six hours a week. I wouldn't do the writing, either – I'm doing a radio series based on a play I wrote. It's called All the Young Dudes, which I've named after the third best pop song of all time. The first two songs? I Was Made to Love Her by Stevie Wonder, and that old Johnny Nash song, I Can See Clearly Now.

Josie: Guys quite like to go out for a drink with a funny woman, and any man worth his weight in gold – or salt or whatever it is – would like a funny woman, because in the end looks go, but humour remains. But men do get intimidated, I think.

Jim: [studying Dr Martens intently] It's not a guaranteed attractive thing, but it's not unappealing. Let's say I prefer a woman with a sense of humour.

Josie: I haven't got any, because I don't do stand-up. I don't usually put people down anyway. I just say something pathetic like 'Stop it'.

Jim: I don't normally get heckled, but the best I ever heard was from the comedian Jeremy Hardy. There was this bloke in the audience who was so drunk he could hardly talk, so he was just making these noises, and Jeremy said to him, 'Martin, it's over, why do you keep torturing yourself like this?' He got a standing ovation. 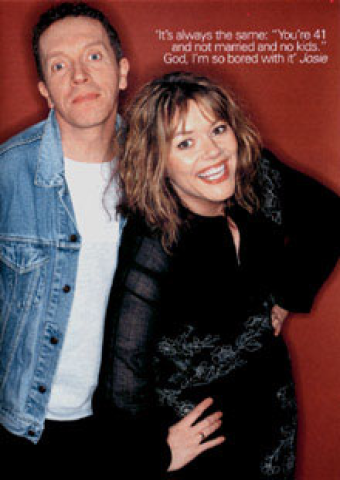 Josie is always being asked why she's not married. Is this relevant in the noughties?

Josie: That really pisses me off. Of course it's not relevant. I did an interview with a theatre magazine recently, and I thought, hoorah, they'll ask about theatre, but no, they wanted to know why I'm single. It's always the same: 'You're 41 and not married and no kids.' God, I'm so bored with it. My last proper boyfriend was four years ago. I go on dates and have boyfriends, obviously, but… no, I'm bored with this.

Jim: No, not remotely relevant. I do wonder if her singleness is connected with her job. She never has boyfriends, which is staggering because she's so gorgeous and funny and talented. Maybe guys are afraid of her.

Josie: Champagne, and Jim's is Guinness. That's why we tell him he's old enough to know better.

Jim: Mine is getting fantastically drunk and then getting a mini-cab home, because of the joy of pronouncing 'Wimbledon' when you're completely drunk. I'd say Josie's is champagne.

What is his/her most endearing quality and most annoying habit?

Josie: They're both the same. Jim is very grounded and loves his family and friends and don't take no shit. He's very black and white, and if he believes something, he'll believe it and that's that. I wish I could do that. It's not religious faith, because he's an atheist, he just knows where he stands.

Jim: They're both the same: her ability to break wind in crowded places and then blame it on someone else.

Josie Lawrence, 41, made her name on the TV version of impro comedy show Whose Line is it Anyway? She works extensively in theatre, including for the RSC, and starred in her own TV series, Josie. She describes herself as 'a jack of all trades', and recently surprised fans by taking over Elaine Paige's role in the West End production of The King and I. She is single and shares her east London house with two cats, Enoch and Eli.

Proclaimed the father of British improvisation by critics, Jim Sweeney still appears at the Comedy Store clubs in London and Manchester three nights a week. An original member of the Whose Line is it Anyway? cast, the 46-year-old's sketches won him a Fringe First at the Edinburgh Festival, but his proudest moment was 'being the only non-dancer in a dance interpretation of Macbeth'. He lives with his girlfriend Carol, 35, and their two children in Wimbledon.